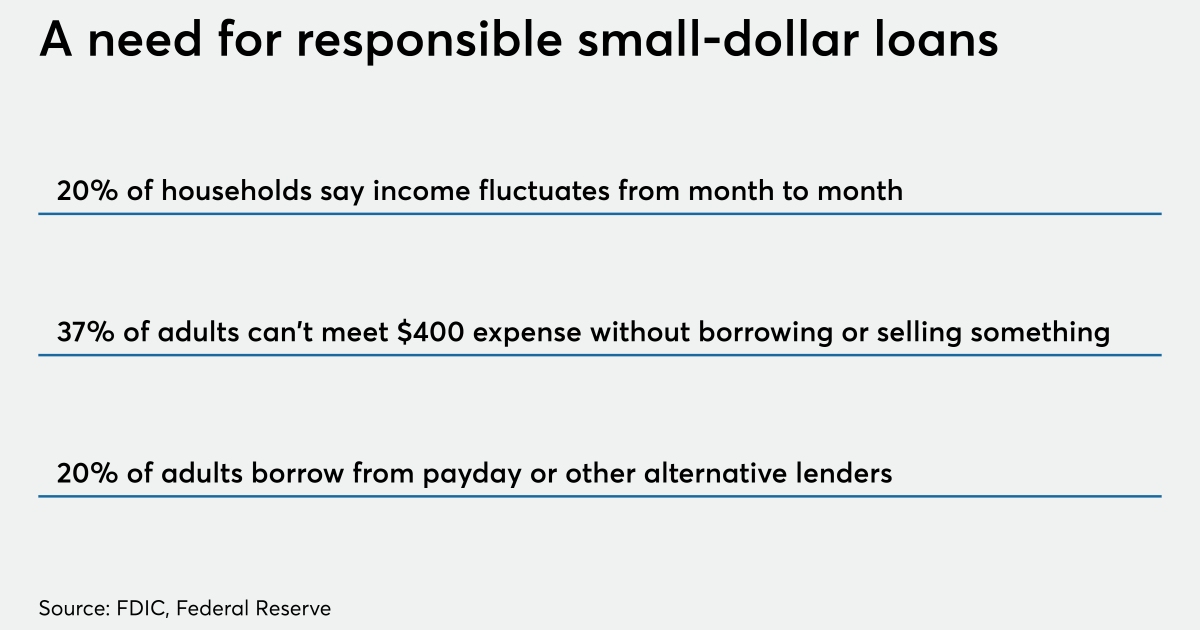 Four federal regulators on Wednesday released new guidelines that provide a consistent framework for banks and credit unions on how to offer low dollar consumer loans without raising red flags in Washington.

The long-awaited guidelines – issued by the FDIC, the Office of the Comptroller of the Currency, the Federal Reserve and the National Credit Union Administration – aim to encourage banks to make more small loans. It offers general principles rather than prescriptive rules.

For example, the guidelines state that the price of small loans should be “reasonably related to the risks and costs of the financial institution’s product”. This language suggests that regulators frown on a loan product that carries an exorbitant interest rate while costing little money to create and bringing little risk to the lender.

But it stops long before more concrete restrictions, like a 36% interest rate cap, which many consumer advocates favor. A regulator who spoke on condition of anonymity on a call with reporters said agencies did not think it was appropriate to create a price cap, or even to suggest the existence of ‘such a ceiling, because none exist in federal law apart from the restrictions. on the price of loans to soldiers and their families.

Wednesday’s joint announcement could help open the door for the return of the so-called deposit advances, which a handful of banks offered until a crackdown under the Obama administration, although likely under amended terms.

Banks that offered deposit advances until 2013 typically charged a fee of $ 1.50 to $ 2 for every $ 20 borrowed, with repayment often taken from the borrower’s next direct deposit check. Much like in the payday lending industry, borrowers frequently rolled over old loans for new ones, a cycle of indebtedness that has drawn criticism from consumer advocates.

The FDIC on Wednesday announced plans to reverse its restrictive 2013 deposit advance guidelines, as did the OCC, which took the same step in 2017. The deposit insurance agency also said that it would withdraw a 2007 letter to financial institutions that encouraged loans with annual percentage rates not to exceed 36%.

But the new guidelines also contain language that may force banks to make changes to the discontinued version of the deposit advance product. For example, it states that product structures should “support the borrower’s affordability and successful repayment” within a “reasonable timeframe rather than immediate re-borrowing, rollovers or collectability in the event of default”.

Another complication for banks wishing to revive the deposit advance is the Consumer Financial Protection Bureau’s payday loan rule status, which places restrictions on loans of 45 days or less. Although the office must repeal much of the rule, its final fate could be blocked in court for some time.

Under the old deposit advance product, banks received the first installment of any deposit into the customer’s account, making it difficult for borrowers to determine which payments to prioritize, according to a second agency official who spoke to reporters on condition of anonymity.

Under the new guidelines, banks are likely to give their customers more flexibility as to which bills to pay first, the official said.

The advice goes beyond deposit advances, however. Its principles will also apply to certain open-ended lines of credit that banks and credit unions offer to consumers, as well as longer-term installment loans. It does not apply to credit cards or bank overdraft programs, which provide an alternative source of short-term liquidity to consumers.

The guidelines encourage financial institutions to make small loans using underwriting techniques that go beyond the credit ratings of borrowers. It specifically mentions analyzing the activity of consumers’ deposit accounts as a means of assessing their creditworthiness.

The interagency document also endorses the idea – prevalent in industry circles in recent years – that lenders can reduce the cost of providing small loans by using new technology.

The guidance received a warm welcome Wednesday from the Consumer Bankers Association, which pressured regulators to provide a more unified framework for small dollar loans.

“Previous guidelines issued by regulators years ago limited the ability of banks to offer their customers short-term liquidity,” said Richard Hunt, chairman and chief executive officer of the business group, in a written statement.

Alex Horowitz, Senior Research Fellow at Pew Charitable Trusts, commented broadly in favor of the joint guidance, although he expressed disappointment with some provisions.

Horowitz expects more banks to begin offering small dollar installment loans and consumer lines of credit as a result of these directions. “I think there is enough clarity here for the banks,” he said in an interview.

The National Consumer Law Center has toughened the actions of regulators, describing them as part of the Trump administration’s continuing assault on protections against high-cost loans.

“The American public strongly supports limiting interest rates to 36%, so it is shocking that in the midst of an economic crisis the FDIC is repealing its 36% rate forecast and letter warning of the dangers of lending on salary, “said Lauren Saunders, the Deputy Director of the NCLC, said in a statement.

Small loans have been an area of ​​interest for Comptroller of the Currency Joseph Otting and FDIC President Jelena McWilliams, who have argued that pushing banks out of the market has left payday lenders and other predatory players fill the void.

Federal agencies have been struggling to find a more harmonized approach to regulation for at least the past year. The coronavirus crisis is an example of a situation where responsibly-offered small dollar loans can play an important role in helping consumers, the four agencies that released the new guidance said in a press release on Wednesday.

This story has been updated to include the reaction of the banking industry and consumer advocates.

Correction at 10:09 a.m. EDT Thursday: An earlier version of this story incorrectly quoted Lauren Saunders of the National Consumer Law Center regarding interest rate guidance previously given by the FDIC. This orientation encouraged loans with annual percentage rates not exceeding 36%.