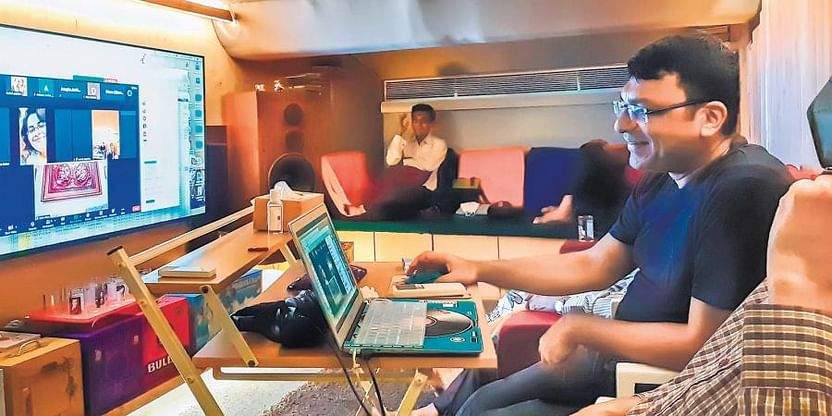 Earlier this month, as the clock struck 10:30 p.m. on a Monday, members of Nostalgiaana, an online community of vintage film music lovers, listened to a special about Lata Mangeshkar. A song from a lesser known movie called Naach Ghar (1959) was played, followed by another rarely heard gem ‘Samjhe na baat meri’ from Sa Re Ga Ma Pa (1972). The Zoom-based radio-style show’s chat window began buzzing with messages from listeners who were listening to these songs for the first time.

It was their shared passion for music that brought together Shankar Iyer, Archisman Mozumder (both from Mumbai) and Balaji Ramachandran (Chennai), the founders of Nostalgiaana in their 50s. What started as a chance meeting on long-forgotten Yahoo groups and Orkut communities has now turned into musical sessions on Zoom. “We were extremely passionate and between us we shared songs in Hindi, Marathi, Bengali and Tamil. We started Rewind in 2014 and did our first show ‘The Parsi Connection’ in Mumbai, where we celebrated Parsi musicians such as Kersi Lord, Homi Mullan and Burjor Lord,” says Iyer. Initially, the trio did a few shows in small gatherings, where 50–100 people would gather to listen to old songs and discuss various aspects of film music. Later, their popularity led them to put on shows for banks and Rotary clubs. “When the lockdown was announced in 2020, we went online. We did an hour-long show in April and May on Zoom and the response was encouraging. So we started a paid subscription,” says Iyer. Rewind is now Nostalgiaana, has 250 members who meet three times a week online to listen to lesser-heard works of Hindi film music.

For vintage music collectors, it’s a passion project and they invest a lot of personal resources to keep it going. Take, for example, Kushal Gopalka, a 54-year-old businessman and musicologist based in Mumbai. As a child, Gopalka was surrounded by records, cassettes, audio tapes and music lovers. “In the late 1980s, we had mehfils of music lovers in my house,” says Gopalka, who has a fine collection of 1,50,000 songs on records, cassettes, reels and CDs. Besides his once-a-month music sessions at home, he has done guided listening sessions in public places, such as the Prince of Wales Museum and the Birla Center for Art and Culture, Mumbai. “For a session on percussion, we had the greats Homi Mullan and Kersi Lord who talked about orchestration. Legendary lyricist Naqsh Lyallpuri did a lyric session for us,” he adds.

The members of these clubs cannot thank the organizers enough. Mumbai-based communications professional Kalpana Swamy could get through the tough days of lockdown listening to Nostalgiaana. “My parents had an encyclopedic knowledge of movies and I took that passion from them,” says Swamy, who started attending Rewind-hosted programs in 2017. When the lockdown started in 2020, it was a blessing disguised for Swamy, as she might attend shows sitting at home. “Being part of this group helped me understand the intricacies of a movie song. Those elements we miss in casual listening, like the arrangement of a song for example,” she adds.

The organizers are passionate about the different facets of music. For example, Gopalka spends much of her time digitizing old records and meeting collectors across the country. Once the pandemic broke out, he started hosting Zoom sessions for other music lovers. Kersi Noshir Mistry lives in the United States and joins Gopalka’s online mehfil every Thursday. “I left India in 1977. Songs have the ability to open your subconscious. I can’t listen to an old song without remembering my parents and Bombay where I grew up. Every time I listen to a song, I relive a part of my life,” says Mistry.

In Kolkata, Pawan Agarwal organizes monthly karaoke and listening sessions in a forum called Pawan’s Music Adda. Since January 2012, lovers of vintage film music have found themselves at his place for this adda. “Many of us started learning singing after attending these sessions. One session we held was called ‘Chowringhee se Chowpathy Tak’ on the contribution of Bengali music and artists to the film industry of Bombay,” says Agarwal, 66.

For many, it’s a full-time project. Iyer was a banker but now runs Nostalgiaana full time, along with Ramachandran. “Cinema music is a work of art. A lot of hard work and passion has gone into it over the decades to make movie songs what they are today,” he says. Melophiles couldn’t agree more.

✥ Swar Aalap was launched in May 2002 by percussionist Dinesh Ghate to highlight the contributions of film musicians, arrangers and singers.