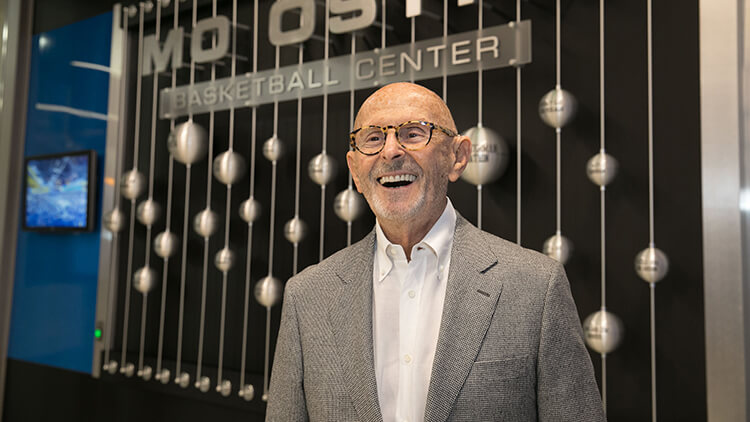 The legendary music executive, who was inducted into the Rock and Roll Hall of Fame in 2003, spent a quarter century as chairman and CEO of Warner Bros. Records, where he worked with many of the most influential artists of the 20th century, including Frank Sinatra, the Beach Boys, Jimi Hendrix, Quincy Jones, Madonna, Joni Mitchell, Randy Newman, Prince and REM

Throughout and after his long career in the music industry, during which he distinguished himself as being particularly friendly and receptive to the visions of artists, Ostin maintained a deep connection with UCLA. He and his late wife, Evelyn, contributed frequently and generously to the arts, medicine, education, and intercollegiate sport – with a particular focus on student-athletes.

On campus, Ostin’s legacy includes the Evelyn and Mo Ostin Music Center, designed to provide students with access to the latest advances in music technology, and the Mo Ostin Basketball Center, which houses the Bruin men’s and women’s basketball courts. Additionally, he has served on the Board of Visitors for the UCLA School of the Arts and Architecture and the UCLA Herb Alpert School of Music.

“Mo was surely one of the most beloved figures in the music industry – a man known for his deep respect for the artistic process and his willingness to take risks – but he also believed deeply in the transformative power of music. ‘UCLA,” Chancellor Gene Block said. . “He and Evelyn have helped our university create one of the best music programs in the country, and their support has extended to athletics, medicine and other fields. He was a wonderful friend and a real Bruin.

In honor of his many professional achievements, philanthropy, and service to the university, Ostin, who graduated in 1951, was named Edward A. Dickson’s 2019 UCLA Alumnus of the Year.

The Evelyn and Mo Ostin Music Center, which opened in 2014, offers students and faculty the opportunity to work with state-of-the-art music industry tools and includes a high-tech recording studio, rehearsal and teaching space, a cafe and social space for students, and a music production center.

“With one of the best music programs in the country, UCLA is preparing the artistic leaders of the future,” Ostin said in donating $10 million to fund the construction of the center. “I am proud to show my continued support for the creation of a center that will prepare students for careers not only in performance and academia, but also in music journalism, the entertainment industry and the sectors public and not-for-profit. In today’s competitive global environment, students must be well-rounded professionals.

He also established the Ostin Endowment Fund for the Performing Arts to support efforts, including scholarships and fellowships, to attract and retain high caliber performing arts students from around the world, and supported the UCLA Herb Alpert School of Music Music Partnership. Program, which brings UCLA music students to public schools and community centers from K-12 to provide children and youth with musical instruction and education.

In 2015, Ostin’s $10 million donation paved the way for the construction of the 35,000 square foot Mo Ostin Basketball Center adjacent to the Pauley Pavilion, which opened in 2017 as a basketball center. dedicated training and operational home for the men’s and women’s basketball teams.

“Everyone seems to be thanking me, and in fact, it’s probably me who should be thanking you and UCLA for everything they’ve done for me,” Ostin said at the center’s ribbon-cutting ceremony. . “It’s really impacted my life and helped shape me as a person, and anything I can do to give back I will definitely do.”

Over the years, Mo and Evelyn, who died in 2005, were passionate supporters of UCLA. In 1998, they were co-chairs of the “Royce Hall Encore – Celebrate the Return” fundraising gala after major renovations to the famous hall, which was damaged in the 1994 Northridge earthquake. They were also the founders of the UCLA Film & Television Archive board, and they supported the UCLA Lab School and the Jonsson Comprehensive Cancer Center.

The Ostins’ philanthropy extended beyond UCLA and affected the lives of many others in Los Angeles and beyond.

Ostin is survived by his son Michael, who serves on the Dean’s Advisory Board of the UCLA Herb Alpert School of Music.