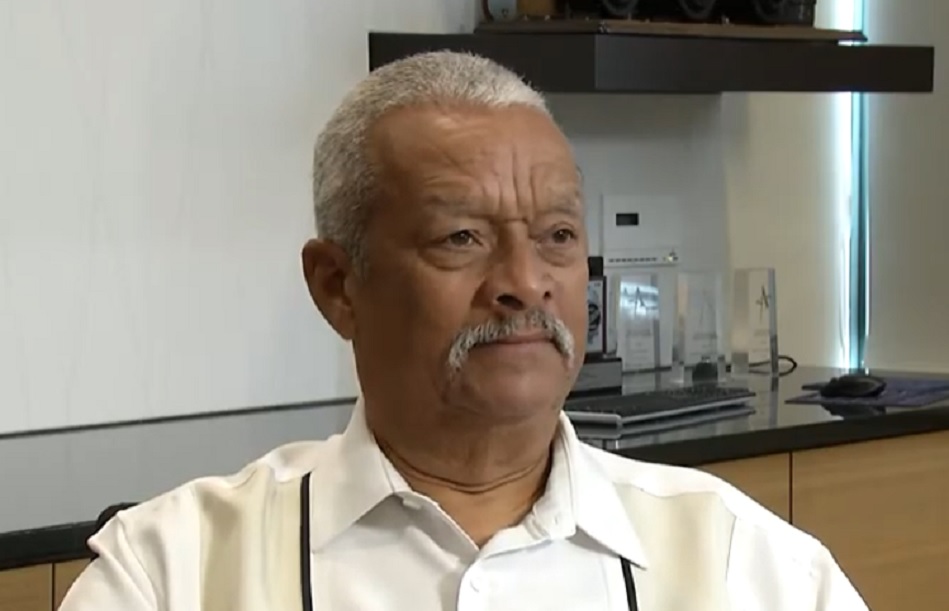 In an era of great TV reporters, from 1965 when Westinghouse Broadcasting revolutionized Channel 3 news to the turn of this century, Harvey Clark could stand up to anyone.

Clark, who died on October 16 at the age of 76, is said to be in contention for the absolute best.

During his Channel 10 years from 1978 to 1991, Clark was an authoritative voice who not only found and presented the flesh of the stories he covered, but who could recognize a good story or angle and make it into one. part of his report.

With his rich baritone voice, Clark’s pieces for Channel 10 combined intelligence and urgency. He could be quick-witted when a situation demanded it. He could be impactful and ask important questions his colleagues may have missed. He could be light and personal on the rare occasion he was asked to make a feature film.

Whatever his assignment, Clark was a constant and important asset to “Channel 10 News” at a time when he was setting the journalistic standard for the market.

Channel 6 has always led in the odds. Channel 3 showed how intensely and professionally local news can be broadcast. Channel 10, with Clark among the people who made this possible, has dominated the market in the quality and depth of its stories.

Oh, to get the standard I’m referring to in today’s news programs. Or journalists authorized to do what Harvey Clark and his colleagues at all the news stations were once supposed to do.

Clark could be praised for a number of stories, but one of the hundreds he has reported stands out and is his lasting legacy for anyone familiar with the Philadelphia TV news.

On May 13, 1985, Clark earned the distinction of doing the most beautiful, engaging, and comprehensive work in presenting the story of MOVE to the public in Philadelphia. He received the local Emmy Award for Best Reporting for his superb effort.

Working with photographer Pete Kane, who moved into a house near the burning MOVE block and filmed footage through his window, Clark was able to speak to the visuals and reveal information only he had. He also did a first-rate job speaking to police, firefighters and other officials at the scene as the 6200 block of Osage Avenue was destroyed by an incendiary device that a police helicopter struck. dropped on the MOVE house at 6221 to drive its residents out and into custody.

The tactic has gone horribly wrong. People were killed, others, including children, were injured and, as mentioned, a block of townhouses disappeared from the landscape of West Philadelphia.

On a day that deserves a place in the annals of the most covered and best-covered stories in Philadelphia history, Harvey Clark has proven his courage in all aspects of his work.

Of course, he constantly proved it.

Not only a good reporter, Clark was a top notch and incisive interviewer, who showed this talent as the host of the weekly public affairs show, “Channel 10 For the People”.

As well as admiring Clark’s work, I had the pleasure of knowing him, first as a reporter and columnist writing on local television and later as a staff member of Channel 10. During this time , I had the chance to have daily conversations with a dozen sharp people. I always looked forward to meeting Harvey in the newsroom or in the hallway and seeing him come to my office to chat. He was intelligent, witty, a gentleman who nevertheless had a life to tell and a natural storyteller.

I can think of a lot of the stories and bits of wisdom that Harvey shared, but I’m going to pick one that I found particularly funny. Someone in Clark’s family, I believe his son, had a job in New York and moved to Washington Heights. Whenever Clark came to visit him, he found his windows smashed by people who wanted to take a look, and maybe a sample, of what Clark might have in his car.

â€œI tried everything, making sure nothing was visible in any seat, shelf or compartment, leaving notes saying I had taken everything of value in the car. Nothing worked. Broken windows, below the insurance deductible. So you know what I did this time? He asked, laughing in part from his deep, knowing laugh, “I just left the windows open.” Heck, they’re gonna “inspect” the car anyway. At least I won’t have any more wages for more windows!

Clark was not the only member of his family to carve out a place for himself in the television news. Her sister, Michelle Clark, has a place in television history as the first black female reporter to be hired by a network and awarded major stories for the “CBS Evening News,” which in her time featured featuring Walter Cronkite as presenter.

Michelle Clark sadly died in a plane crash in December 1972 between Washington, DC and Chicago’s Midway Airport. It destroyed a house 2.5 miles from Midway, colliding with its roof and claiming the lives of residents of the house, a member of the United States Congress and 42 others in addition to Ms Clark. Eighteen passengers survived the crash.

After his career in the news, Clark joined Mayor Ed Rendell’s staff as a municipal representative. He later served as a spokesperson for Philadelphia Gas Works, a job he retired from in the middle of the first decade of this century.

Clark, who was born in Chicago, is survived by his wife, Anna Marie, one son, Derek, and his wife, Aisa, and grandchildren David II, Eric and Charles. A celebration of his life is in the works.

Do well in the mornings

Regular readers know a little that I like more than a genuine, spontaneous conversation between hosts or panelists on talk shows or presenters and reporters on TV news.

Hats off to several “PHL17 Morning News” lead cast for the fun and camaraderie they provided after traffic reporter Jenna Meissner twisted acting reporter and presenter Khiree Stewart about going to a formal affair and to wear a great suit but not with such elegant shoes, but with boots in which he tucked the pants under his knee.

The discussion continued in a very entertaining manner, and you could tell how much the Channel 17 morning crew, including presenter Nick Foley, watched the proceedings with obvious amusement. More than that, you could be how quick and crisp everyone involved, including Foley again, was in what looked and felt like a pure all-you-can-eat swap.

Similarly, I liked the facial expressions of Bill Anderson, host of “Good Morning Philadelphia Saturday,” when he presents stories that have a touch of weirdness.

Anderson does not editorialize. After a blurb, he’ll suck his lips in and slide the resulting smile to the right side, as if to say, “Lord, what fools these mortals are.” He’s also good at raising his eyebrows or just staring wide-eyed into the camera, shaking his head to ask, “Can you believe what you just saw or what I just told you?” “

To Anderson’s credit, his mice and digs are still appropriate and, at least by this viewer, appreciated.

Anderson is also able to read and report direct news and keep his face straight while he does so. He also does a regular feature on Channel 29 titled “For Goodness Sake”.

Payne back in the region

Freda Payne literally saw her recent â€œTribute to Ella Fitzgeraldâ€ show at New Hope’s Bucks County Playhouse blown and blown just off the stage as New Hope took the brunt of hurricanes and tornadoes during its run there.

A troupe with nearly 50 years in show business, including years of appearing on numerous variety shows and rebounding between Dick Clark’s “Bandstand” and shows like Ed Sullivan, Dean Martin’s and Carol Burnett’s doing her ever-beloved 1970 hit, “Band of Or,” Payne was not going to let audiences come to see her remain disappointed.

Payne returns to the Bucks County Playhouse for a three-day, four-show weekend this Friday through Halloween Sunday.

Two days after finishing in New Hope, on Tuesday, November 2, his biography, “Band of Gold”, written with Mark Bego, is due out. The book has an introduction by Payne’s good friend, the late Mary Wilson, a staple of The Supremes across the entire band. It features stories about the various celebrities she has met and worked with.

Speaking of which, another upcoming Payne outing is an extended recording on which he duets with Johnny Mathis, Dee Dee Bridgewater, and Kurt Elling.

I can understand why Netflix’s â€œThe Squid Gameâ€ is such an international hit, but I find its storytelling style a bit over the top for me and I find its comic book sensibility too over the top.

I can enjoy the show, but I don’t want to watch it. Even as he delves into the situations that motivated the mostly doomed contestants to enter the deadly game that the series portrays, I find my eyes rolling as much as they are looking at the screen. A few episodes, I pulled back and probably won’t go back.

“Dopesick”, on Hulu, is more interesting and holds my interest although I find it a bit pat and intended to be a populist slam in the pharmaceutical market instead of a track that saved some of its cards and reveals them more late.

“Dopesick” lets you know where he stands in his first scenes. He wants to show and shows how a mega-pharmaceutical company marketed the opioid Oxycontin while knowing about its addictive tendencies.

I cannot say that “Dopesick” is inaccurate in the story he tells. I’m not as emotionally involved as I could be because I can anticipate all of the obvious ploys and attitudes he uses. He wants to be a good guy on a crusade instead of letting his story, a good and strong one, unfold more subtly. , do more good than harm.

This doesn’t negate the harm, but I would have liked to see something along the same lines that the National Institutes of Health chief of palliative care told me when I was doing a magazine article on pain and multiple sclerosis.

â€œThe pain is real and if treated with care it makes legitimate use of pharmaceuticals that could be controversial in other applications. While there is no mystery, I wish the writers of “Dopesick” had created some. What if he had told more sides of his story.

Not everyone approves of this princess’s marriage. She goes ahead anyway

Is Disney Channel’s “Halloweentown” a Musical? Here’s what we know about the film’s soundtrack