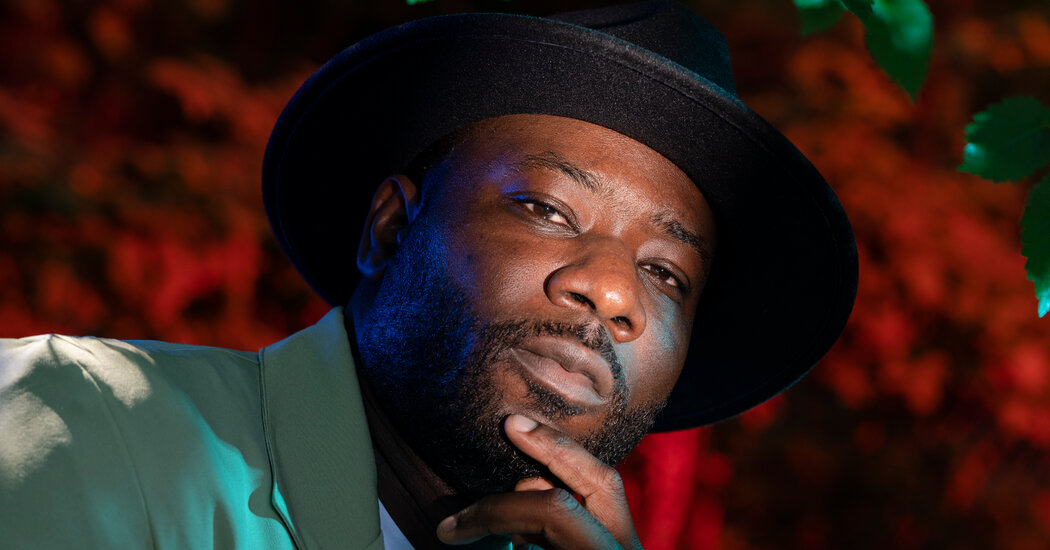 DECATUR, Ga. — Blitz Bazawule didn’t look like someone with the weight of a multi-million dollar movie on his shoulders.

On a Saturday afternoon earlier this month, Bazawule, the artist, musician and filmmaker, was at home here, on a break from making a new musical adaptation of the movie “The Color Purple.”

In a few hours, he would be heading for an editing session on this film. But for now, as a scented candle burned on a table in an adjoining room where he sat, he cautioned that the tranquil atmosphere and placid demeanor didn’t tell the whole story about him. “I have a great poker face,” he said.

For the past two decades, 40-year-old Ghanaian Bazawule has been on a relentless creative tear. He has recorded and performed worldwide under his hip-hop stage name, Blitz the Ambassador; he directed music videos and a well-received debut feature, “The Burial of Kojo,” and served as director on Beyoncé’s visual album “Black Is King.” When he seeks a break from these projects, he paints.

And this month he will publish his first novel, ‘The Scent of Burnt Flowers,’ which Ballantine will release on June 28.

Bazawule took the scale of its production in stride. “I’m one of those people who says, ‘I bet I can do it,'” he said. “Often I am wrong. But sometimes I’m right. It is enough to be right several times.

“The Scent of Burnt Flowers” convincingly demonstrates that Bazawule is no literary dilettante. Set in the mid-1960s, the novel tells the story of a black couple, Melvin and Bernadette, who fled the United States for Ghana after Melvin killed a racist attacker in self-defense.

In Ghana, they hope to seek help from its beleaguered president, Kwame Nkrumah, who was Melvin’s classmate. But their efforts to reach Nkrumah are complicated when they cross paths with a local musician, Kwesi Kwayson, who has his own dream of going to America.

The novel is by turns exuberant, romantic, and solemn, always keenly aware of the historical forces that shape its characters’ destinies and fascinated by the cultural shocks they experience as they move between continents.

As Bazawule explained, “Nothing is ever what you think it is, no matter how informed you think you are. When you land, you’re always going to learn things.

Growing up in Accra, the capital of Ghana, Bazawule was a fan of World Cup and Africa Cup of Nations football and enamored of the hip-hop culture embodied by American bands like Public Enemy.

“I remember seeing the ‘Fight the Power’ video, which was shot in Brooklyn, and going there is where I want to be,” he said. “Whatever that energy was, I wanted to be in it.”

But as he became interested in global culture and moved to Ohio to study at Kent State University, Bazawule said he was appalled to learn how others viewed the diverse nations of Africa as an undifferentiated whole or ignored their contributions completely.

“It is incalculable how much the world loses every day by intentionally excluding Africa, whether in creative endeavors or science, which is sad because it is the loss of the world,” he said. .

Bazawule added, “I am optimistic. I hope the world aligns with each other and grows richer from the experiences.

He sought to fill these gaps in his own work, such as his 2016 release “Diasporadic,” an album that accompanied his series of shorts “Diasporadic Trilogia,” a triptych with episodes set in Accra, New York, and El Salvador, Bahia, Brazil. .

In 2018, Bazawule released “The Burial of Kojo”, which he wrote, directed and self-financed. The film tells the story of a young Ghanaian girl, Esi (played by Cynthia Dankwa), and her father, Kojo (Joseph Otsiman), who transports her and his wife, Ama (Mamley Djangmah), from their village rural to bustling city to pursue a dangerous financial prospect and confront a long-spent family secret.

With a patient storytelling style imbued with a quiet mysticism, “The Burial of Kojo” has been widely acclaimed. Reviewing the film for The New York Times, Glenn Kenny called it “a near-virtuosic work, a feast of emotion, nuance and beauty, and a startling feature debut”.

Filmmaker and producer Ava DuVernay said the popular success of “The Burial of Kojo” shows the importance of looking beyond traditional outlets for new talent.

“He didn’t get into any of the big, quote-unquote festivals,” said DuVernay, who acquired “The Burial of Kojo” for his distribution company, Array Releasing, and employed Bazawule on his “Cherish the Day” TV series. .

“When I think of the Blitz, I think of all the other Blitzes that don’t have that bridge,” DuVernay added. “Most of the film press only looks in one direction. This man came from a completely different direction.

The success of “The Burial of Kojo” led to new directorial opportunities for Bazawule, including “Black Is King,” which was released on Disney+ in 2020, and “The Color Purple,” which is based on the adaptation stage musical by Alice Walker. novel and is scheduled for 2023.

But Bazawule’s industry peers and admirers don’t see him as a determined careerist and say his interests in multiple art forms are just as sincere and just as valid.

“He really tries to execute his ideas as best he can, and isn’t as concerned about those results because if he were, it would stop him dead,” said Maori Karmael Holmes, Founder, CEO and Creative Director of BlackStar. , an organization that promotes Indigenous and people of color film and media work.

Holmes, who selected “The Burial of Kojo” for the BlackStar Film Festival and for the 2019 Whitney Biennale, described Bazawule as “an accomplished artist who is going to put his all into whatever he works on.” What unites her various works, she said, is her desire “to imagine radical new worldviews and different paths of world-building.”

Bazawule was one of many directors who contributed to ‘Black Is King’, traveling with Beyoncé to Africa and helping create some of her most distinctive and dreamlike visuals, such as the image of the pop singer confidently cradling a snake giant.

He said he found the film fulfilling as a demonstration of Beyoncé’s cultural influence and how she passed on her studio-level freedom from interference to her colleagues.

But in March 2020, when the onset of the pandemic prevented him from continuing to shoot the film, Bazawule found himself wondering what to do next.

“We scattered,” he said. “After a few weeks of sitting around, going, what’s next, I just realized, well, what did I want to do that I didn’t?”

In his seclusion, Bazawule worked on his painting and he committed himself to his goal of writing a novel, a novel that would be shaped by all the music and mythology he had absorbed into his life while telling what he called a “fleeting story” that had captivated him.

“We know a lot about how people escape, whether they escape or don’t escape,” he said. “We don’t always know what happens when you go out.”

Placing “The Scent of Burnt Flowers” ​​in the 1960s – the era of the civil rights movement in America and post-colonial democracy in Ghana – seemed obvious to Bazawule; as he explained, “the world we live in now was shaped specifically by this period, for better or for worse”.

It also allowed Bazawule to include a fictionalized version of Nkrumah, an advocate for the Pan-Africanist movement whose presidency began with hope but ended in his overthrow and exile.

Like the author, Nkrumah was educated at an American university, and Bazawule said he was fascinated by how his former classmates might have felt about Nkrumah’s post-college rise: he is the president of a newly independent country, it’s like when the guy you know from around the corner ends up in the NBA,” he explained.

Bazawule encrypts further details and observations of his personal history in the novel. Bernadette, who is from Baton Rouge, finds Accra’s humid climate oddly familiar, as does Bazawule on her trip to Louisiana.

And the misadventures of Kwesi Kwayson, a touring musician who transports Melvin and Bernadette through Ghana, more or less stem from Bazawule’s own experiences. “The sweat, the frustration, the band members not getting along – it was a lot of first-hand knowledge,” the author said. “My drummer wasn’t that crazy. But it’s still the drummer.

Chelcee Johns, editor at Ballantine who acquired “The Scent of Burnt Flowers,” said she responded to it as both a historical novel and a human story. “History is so important and so necessary,” Johns said. “The evidence of what happened during that time in America and Ghana is still with us today. But you come here for the story of a couple trying to find each other when America is not safer for them.

“The Scent of Burnt Flowers” ​​has been acquired by FX, which is developing the novel as a miniseries, and Bazawule will get even more attention when “The Color Purple” comes out next year. But Johns said she was fundamentally interested in him as a writer who cares about his craft.

“Blitz is at a good place in his career and invested heavily in the book, and that was paramount to us,” she said. “It’s not a one-off project – it’s a great first novel with more to come.”

The room in his house where bazawule sat was once adorned with notes, photos and visual references that he used to write “The Scent of Burnt Flowers”. Now only a few pieces of paper were pasted on its walls, bearing simple motivating slogans: “One step at a time”. “Rest is resistance.”

As Bazawule explained, the way he handles the many demands of his blossoming career is by not viewing them as competing with one another. “I do my best not to separate them,” he said. “I see all of these as extensions of the same thing. And when I do that, I don’t compartmentalize, I don’t get overwhelmed.

Amigo: this fintech is ready